Set up a monthly subscription just once and you’re done. 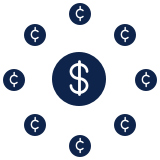 Your donation is split evenly between every Democratic candidate for Congress. We don’t play favorites.

Your donation goes directly to each candidate — not the party accounts.
Subscribe to a better Congress, for as little as one penny per district:

Jonathan Zucker was the first COO and second CEO of ActBlue. Prior to that, he served the DNC as National Director of Operations for Finance during the 2003-2004 presidential cycle. More recently, he has founded or advised several political tech start-ups, including Democracy Engine, ruck.us, and Crowdpac. LinkedIn Profile

Why are we doing this?

For decades, the DNC and other organizations have focused on the handful of swing districts they thought were “winnable.”

This is important, but it’s not enough — because of this strategy, the Democratic candidate in hundreds of districts is just a name on a ballot, abandoned and unable to spread a message about common-sense policies to the people who need to hear about them most. Activists in those districts are left without a cause to rally around, and voters are left without a real choice.

We can change that.